Click Coronavirus Disease (COVID-19) to see whether the measures adopted by Revenu Québec apply to the information on this page. 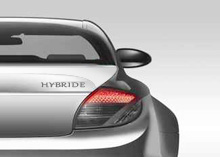 As of January 1, 2012, a purchase or lease rebate program will replace the refundable tax credit for the acquisition or lease of a new energy-efficient vehicle. Only vehicles acquired or leased under a long-term leasing contract before January 1, 2012, may give rise to the tax credit.

The purchase or lease rebate program will apply to vehicles whose engine type includes a form of electrification, and will focus chiefly on rechargeable hybrid vehicles and fully electric vehicles capable of travelling on public roads where the authorized speed limit is more than 50 kilometres per hour.

In addition, to keep consumers from postponing their decision to acquire or lease a rechargeable hybrid vehicle until 2012, tax legislation will be amended such that, for vehicles with a weighted fuel consumption rating of 0.01 to 2.99 litres of fuel per 100 kilometres that are acquired or leased under a long-term lease contract after March 17, 2011, and before January 1, 2012, the amount of the tax credit granted for the acquisition of such a vehicle will rise from $3,000 to $7,769.

For further information, refer to page J.11 of the 2011-2012 Budget Plan, published by the Ministère des Finances.

Read all about how we work to support and inform you. Our vision and values guide us as we carry out our role.

Learn more about how we work to support and inform you

Thank you for your understanding.

Our offices are now open Monday to Friday from 10 a.m. to 4:30 p.m. However, you cannot meet with a representative or get copies of documents from your file.

At our offices, you can:

See Coronavirus Disease (COVID-19) for more information about the measures we have adopted.

Do you wish to continue?