Click Coronavirus Disease (COVID-19) to see whether the measures adopted by Revenu Québec apply to the information on this page.

Rebate of the GST paid on purchases of tour packages

On April 1, 2007, the Visitor Rebate Program was cancelled, and the Foreign Convention and Tour Incentive Program (FCTIP) was implemented. 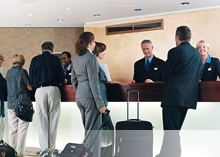 Under the FCTIP, non-residents are entitled to a rebate of up to 50% of the GST they paid on tour packages that include a supply of accommodation. As for non-resident tour operators, they are entitled to a rebate of the GST paid on the accommodations they acquired for sale as part of an eligible tour package. For further information, see GST/HST Info Sheets GI-026 to GI-033 and GI-044.

However, non-residents are not entitled to a rebate of the GST paid on any goods they purchase in Canada and subsequently export from Canada.

Under the transitional rules made further to the cancellation of the Visitor Rebate Program, a non-resident is entitled to a rebate of the GST paid on a supply of accommodation if both of the following requirements are met:

Under the QST system, no tax relief measure applies to supplies of tour packages made to non-residents.

Read all about how we work to support and inform you. Our vision and values guide us as we carry out our role.

Learn more about how we work to support and inform you

Our offices are now open Monday to Friday from 10 a.m. to 4:30 p.m. However, you cannot meet with a representative or get copies of documents from your file.

At our offices, you can:

See Coronavirus Disease (COVID-19) for more information about the measures we have adopted.

Do you wish to continue?